With teams playing on short rest most of the time, Thursday Night Football is more unpredictable than most Sunday games. Team have less practice and preparation time for their opponents, which leads to great games and close finishes. As a sports bettor, you can’t ask for much more.

What’s the spread for this week’s Thursday Night Football game?

The NFL schedule is a complex mechanism. Each team plays 17 games over 18 weeks with one bye week. It’s a difficult task for the schedule makers to make sense of it all, but there’s a set formula that’s followed to put it all together.

The league tries its best to ensure no team is forced to play on a short week more than one time. This isn’t as much of a concern with games played on Sunday or Monday night.

Amazon Prime has taken over Thursday Night Football, so each game will now be exclusively on their streaming service. Those games start at 8:15 pm ET. However, the Week 1 contest is the first game of the NFL season and will be showed on NBC at 8:20 pm ET

Here is the schedule for the upcoming season:

When are the Colts playing Thursday Night Football?

The Colts will get the Thursday Night Football treatment in Week 5 with a road game versus the Denver Broncos. While these two teams will always have the Manning connection, Indianapolis will have their hands full with new QB Russell Wilson at the helm of the offense for Denver.

Check the latest Colts odds direct from IN online sportsbooks.

When are the Bears playing Thursday Night Football?

The Bears appear on the TNF schedule the very next week at home against Chase Young and the Washington Commanders in Week 6.

In Indiana, live betting is available during natural stoppages in the game. This includes commercial breaks, the end of the quarter, and halftime. Once the game kicks off, it doesn’t mean you need to stop placing your NFL bets. In fact, betting the games with live betting is a great opportunity to find value.

If the favorite falls behind early in the game, you might now be able to bet them as an underdog. If the offenses get off to a slow start, you can now bet the over at a lower total. If one team is clearly sleepwalking, you can bet the other team.

DraftKings Sportsbook and FanDuel Sportsbook both have great live betting options through their sports betting apps. You can bet on Thursday Night Football games live from your couch without moving a muscle. It’s extremely convenient. The markets are wide-ranging and fun.

The only exceptions are the opening game of the season and the Thanksgiving night game. Those games are broadcast on NBC.

Peyton Manning did not throw an incomplete pass in the first half, leading the Colts to a 31-24 win over Jacksonville. After a 3-4 start to the season, this win was the Colts’ eighth-straight victory. It gave them an 11-4 record, and clinched their 7th consecutive playoff berth. Keiwan Ratliff‘s pick-six of David Garrard ended up being the winning score for the Colts.

It’s not as memorable because the team didn’t finish the season with a 16-0 record, but Peyton Manning threw for 308 yards and four touchdown passes to give the Colts a 14-0 start to the season. A 65-yard touchdown pass to Reggie Wayne in the fourth quarter gave the Colts a 35-31 lead over the Jaguars. That was the final score.

It wasn’t fun at the time, as it almost cost the franchise the first-overall pick and the opportunity to draft Andrew Luck. However, Dan Orlovsky’s touchdown pass to Reggie Wayne with 19 seconds left was a fun moment in a miserable season. 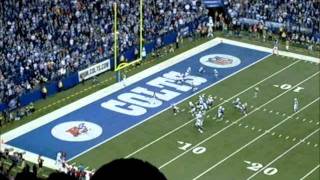